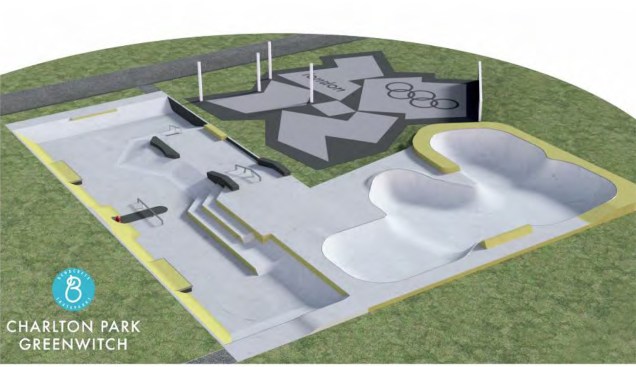 Charlton Park Skatepark was built in 2017 by Greenwich Council. The school of skate run group lessons and private skateboard lessons at Charlton, and have run birthday parties, and scout group sessions there. 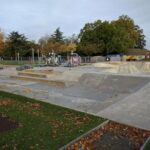 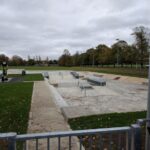 All lessons at Charlton

Charlton Skatepark is really popular with street skaters because the lines join up quite well. The council banned skating in the town centre in 2017 so the design was intended to cater for the street skating scene which had grown there. The Royal Borough of Greenwich are quite retrogressive when it comes to skateboarding unfortunately – something we hope to change.

The street section has a staircase which is a three set, but the steps bigger so it is more like a six set. There is a nice flat bank hip, a lot like the Meanwhile two hip. There’s hubbas with both frontside and backside approaches, and rails going down some banks which lead to a flat bank with a kerb on the top.  There’s also a red fire hydrant embedded in a flat bank.

The bowl is four foot in the shallow, up to just shy of 8ft in the deep. There’s a steep flat bank integrated into the design, which is super challenging when skated as a bank, but sadly it interrupts the flow round somewhat. There is an attempt at a cradle but it doesn’t really go over vert which is a shame. There’s an escalator from the deep to the shallow.

There is a really mellow quarter pipe at the other end which is really good for learning to drop in.

There are toilets and cafe serving great coffee next to the skatepark.

Here is Gabe’s first line ever and couple new learns while he was having a private with coach @_nilovisca 🙌🏻 soon he’ll be teaching us!! 😁 #skatemotivation #skateboardingisfun

Bournemouth summer skate school is go tomorrow at King's park skatepark with Darwin. Weekday mornings til the end of the summer holidays 🛹☀️

Come join the progressing group lessons this summer to give it a go!

We have plenty of availability at our summer lessons! Summer lessons run weekday mornings. We now have increased capacity at our progressing classes in Deptford & Peckham, and new summer holiday lessons at Bromley.