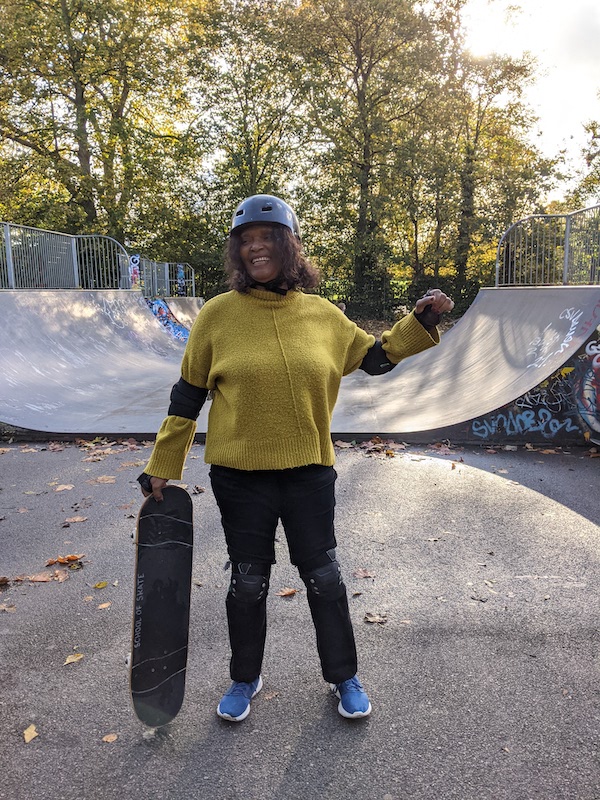 I often get asked ‘Am I too old to start skateboarding?’ Well, recently Nono (pictured) joined us at a private group lesson at Peckham Rye skatepark organised by her daughter. She joined a group of learners with ages ranging from single figures up to what I estimated were several OAPs.

I was amazed by Nono’s attitude of just having a go at something she had never tried before. The first obstacle to overcome was finding out whether she was a Regular or Goofy stance (left or right foot forward) when we had no point of reference. Often kids are riding scooters and have a preference for one over the other. Once we’d established her preference for a Regular stance we got working on our foot placement on the grass. Learning The Push is really the first major challenge in learning from scratch, so we first did some rolling along with my help to get her comfortable with how it feels to just roll. Building familiarity with this sensation can be very helpful for when we get on to The Push. Nono then spent a lot of the lesson working independently, just pushing without putting the back foot on. Gaining confidence in moving the majority of your weight over the board is a huge barrier to overcome.  Towards the end of the lesson she was putting the back foot on with some measure of success.

After the lesson had ended I tentatively asked Nono her age, and she responded with 74. I was astounded. I was glad I didn’t ask during the lesson as I think my nerves would have got the better of me!

It was a lesson to all of us that you shouldn’t allow preconceptions of an activity prevent you from doing it. Yes it’s a possibility Nono had fewer preconceptions of skateboarding to encumber her. I know lots of people who’ve said ‘I’m in my 30’s/40’s – am I too old to learn to skateboard’. Well, here’s your answer. Whether you should start skateboarding comes down to what your goals are. If you set your sights very high, and are in middle age, starting may be a disappointment. If your goals are more moderate, there’s never a reason not to. Certainly not age.

Check out the 🌈 over @folkestonegardensskatepark today

Inspiring the next generation of skaters 💪

Here's @finn_does_skateboarding graduating with his drop in at Charlton 🙌

Just wrote a post comparing a decathlon kids board with the blind og soft top. There are pros and cons to both. Often complete skateboards for kids come with bushings that are far too hard. This needs addressing. Link to the site in bio.

As always #supportskaterowned if you can