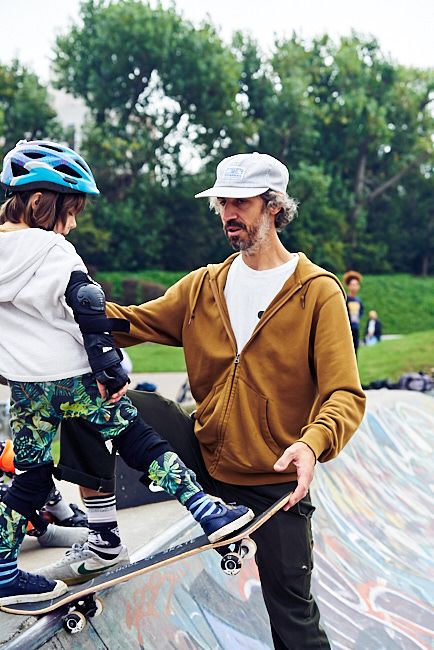 Aside from the obvious physical benefits of exercise, research has shown that Skateboarding contributes to mental health and wellbeing.

As I go into in our video on Falling failure is an essential component of the learning process. We fail, we learn from our mistakes (hopefully) and we try again. We improve. The ability to fall, get back up and learn from that failure, to persevere, and go on to succeed is called resilience, and isn’t something to be taken for granted. If we can learn to do this on our skateboard, we can carry this ability into other aspects of everyday life, and we have a recipe for success & happiness.

Tricks in skateboarding are often combinations of other more basic tricks. As we progress, we take what we’ve learnt and combine them to create new tricks. This state of Neuroplasticity is often referred to as being the fountain of youth and contributes to a sense of wellbeing in the practitioner.

Many sports have rules. Skateboarding has no rules. There is freedom of expression. You can do what you want. The feeling of being to express yourself freely without constraints, which are everywhere in modern society, contributes hugely to wellbeing.

As we grow into adults the opportunity to play, an activity that is critical to our wellbeing is reduced considerably. Often adults seeking play lead to unhealthy, risky pastimes, such as going to the pub, alcohol and drug use, or casual sex. Sport is a way of accessing play, and skateboarding, with its lack of rules and opportunity for self expression is particularly easy way to engage in playful behaviour which is relatively less risky.

With the advent of social media, the length of time we can focus is reducing. Practising skateboarding, focusing on a trick we are learning, increases our ability to focus. Developing this ability to focus is much akin what is developed when practising a martial art.

When we invest our time into a trick which we eventually make, the reward, that thing makes us smile, and feel good, is a dopamine hit. This also helps us develop an appreciation for a delayed reward; a small investment of time gives a small reward, a bigger investment of time and effort into something more difficult gives us a bigger reward, a bigger dopamine hit. It allows to appreciate the importance of patience & perseverance to achieving something more substantial. To achieve something epic can take a lifetime.

Check out the 🌈 over @folkestonegardensskatepark today

Inspiring the next generation of skaters 💪

Here's @finn_does_skateboarding graduating with his drop in at Charlton 🙌

Just wrote a post comparing a decathlon kids board with the blind og soft top. There are pros and cons to both. Often complete skateboards for kids come with bushings that are far too hard. This needs addressing. Link to the site in bio.

As always #supportskaterowned if you can