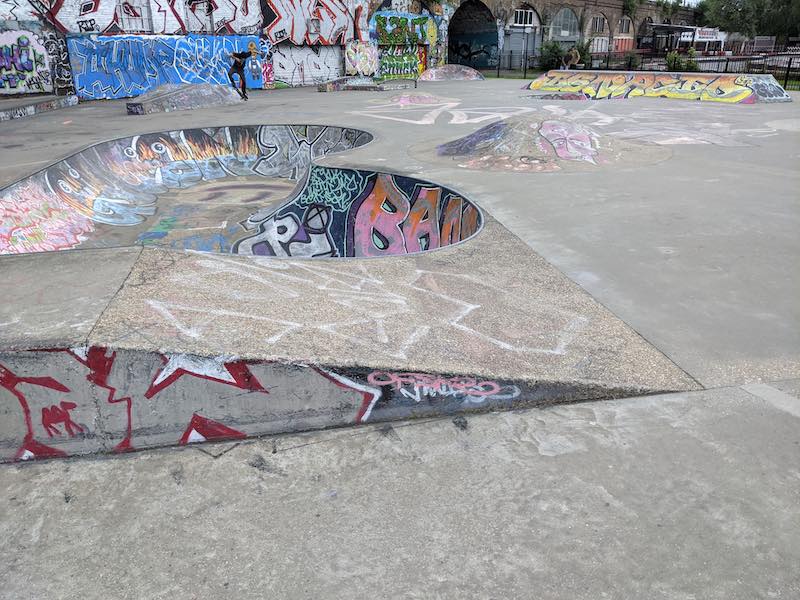 Built by Gravity in 2011, Mile End skatepark is designed primarily for street skaters, with ledges for days, but also features a challenging bowl. 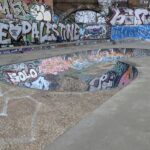 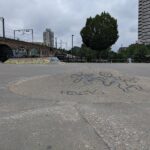 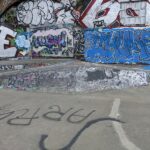 All lessons at Mile End Skatepark

The skatepark is a circuit of street features with some pump bumps in the middle, which makes it popular with street skaters. On the far side of the park next to the bowl is a long ledge running about 15 metres across.

There is a mellow flat bank adjoining the bowl which is used as a starting point for a run, which approaches the flat bank hip to ledge. From there, following the line there is a flat bar, then a planter, followed by a taco, then a manny pad, and finally a irregular shaped pyramid feature before the bowl.

There is a mellow bank that is good for learning The Roll In and to The Fakie.

The bowl has a section which can be used for learning The Pump however one side is flat and other bowled out, so it’s tricky. The pump bumps are also good for learning to ride over and to pump.

Across the road is the Mile End Children’s Park and Pavilion. It has a toilet and kiosk (although currently temporarily closed) is good for keeping the smaller kids occupied.

We used a @blindskate soft top at this 3 year old's lesson in Charlton yesterday. With kids this young we focus on helping the parent learn how to assist their child, i.e. how to shift their child's weight as they ride different obstacles etc..

Father and son lesson at Charlton park. Dad was reprising the good old days! They were at a similar level and it was fun to see the competitiveness!